For those who are unfamiliar with terpenes, you may be shocked to learn that they may be found all around you. Check out the terpenes list and terpenes chart to learn about each one!

Have you ever had the pleasure of smelling a flower’s delicate scent? Is lavender used as a relaxing or soothing ingredient in your home? Oranges on your counter give out a delicious, citrusy scent that you might enjoy. The plant’s potent terpenes are responsible for the odors. Their primary function is to protect the plant from pests and attract pollinators. Antioxidants and anti-inflammatory capabilities are just two of their many medicinal advantages. 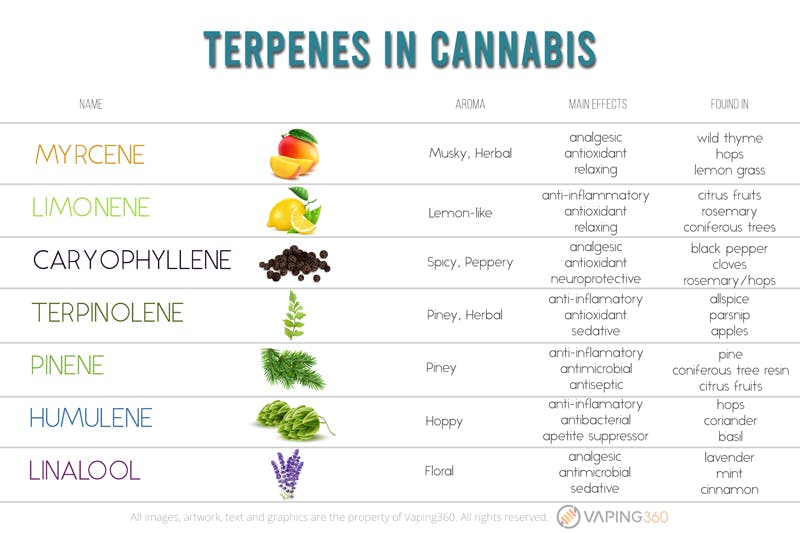 Terpenes aren’t psychoactive so they don’t produce a ‘high’ like THC, but some still contain sedative, anti-anxiety properties. The terpenes found in CBD Dog Health’s product, CALM full-spectrum hemp oil, include many of them. Check out the terpenes list along with the functions of each terpene!

Lavender is the most prevalent source of linalool. Linalool, the primary terpene in lavender, is responsible for its rich, fruity perfume, as well as the relaxing effects it has on the body. In addition to serving as a tool for anxiety, a study in Colloids and Surfaces Biointerfaces found it’s also helpful as an:

Linalool is a natural terpene alcohol that has a floral, citrusy aroma. It is usually extracted from lavender and rosewood plants, but it can also be found in other plants like sage and mint. Linalool is used in perfumes and cosmetics as well as being used in medical applications to reduce anxiety and stress.

Linalool terpenes are also commonly found in many different types of cannabis strains and hemp products. The effects of linalool are said to be relaxing and calming, making it a great choice for those who suffer from depression or anxiety disorders. If you’re looking for an alternative to prescription medications that can help you cope with these conditions, then consider trying out some products that contain linalool terpenes.

Omicene is a monoterpene. It is naturally produced by many plants, including conifers and other coniferous trees. It has a pine-like smell, but it’s not as strong as the smell of the actual tree. Omicene terpenes can be found in many essential oils and are used for their therapeutic benefits. These terpenes are often used in aromatherapy to reduce stress and anxiety, as well as help promote a good night’s sleep.

It’s antiviral, antifungal, antibacterial, and antiseptic in the medical sense. The decongestant properties are also well-known.

The rose-like scent of geraniol is well-known. Lemongrass, citronella, rose oil, lavender, and other fruits all contain this monoterpene. As well as being produced naturally in many plants, it is frequently used in the cosmetics industry.

Anti-cancer, antioxidant, and neuroprotective, according to the National Library of Medicine. Researchers believe it could be a promising chemoprotective drug due to its ability to sensitize tumor cells.

As the National Library of Medicine explains, geraniol has been demonstrated to be protective against a broad spectrum of malignancies including breast tumors and lung cancer as well as cancers of the:

Aside from the FDA and the Flavor and Extract Manufacturers Association (FEMA), these pharmacological effects are therapeutically important as geraniol is generally recognized as safe (GRAS) by these organizations.

Among its many functions, Beta-Myrcene is a potent antibacterial, antimutagenic anti-inflammation agent, and analgesic.  Among the most frequent terpenes in commercial cannabis, myrcene has a distinct earthy aroma. Lemongrass and thyme also contain myrcene. Myrcene has been used as a sleep aid for ages.

Scientists have discovered that myrcene lessens pain by increasing the amount of pain-killing molecules released to the brain and spine.

In order to prevent the consumption of cancer-causing compounds produced by fungi, antimutagenic properties are required. Myrcene inhibits the liver enzyme known as CYP2B1 and lowers DNA damage.

Terpenes Caryophyllene is a terpene found in many species of plants, particularly those of the genus Humulus (hops), but also present in cannabis and spices such as black pepper. It is one of the most common terpenes found in nature. It was first isolated from clove oil in 1836 by French chemists Eugène-Melchior Péligot and Jean-Baptiste Dumas.

Caryophyllene’s flavor and aroma are similar to that of black pepper, which makes it a popular culinary spice. It is also used as a natural flavoring agent for foods, beverages, and pharmaceuticals.

The name caryophyllene comes from the Greek words karpos (“fruit”) and phyllon (“leaf”), referring to its presence in fruits (such as black pepper) and leaves.

To alleviate pain and inflammation, this terpene interacts with the CB2 receptor in the body. Anxiety and despair can be considerably reduced by caryophyllene, according to research findings.

The Entourage Effect and Terpenes

The entourage effect is the result of the interaction between terpenes and cannabinoids. Pain alleviation, anxiety reduction, and inflammation reduction are just a few of the benefits that cannabinoids and terpenes combined bring. As a result, it is imperative that you purchase only the finest, full-spectrum CBD tincture available on the market.

The term “full-spectrum” refers to a strain that contains all of the known cannabinoids and terpenes. The Cannabis plant has thousands of cannabinoids and terpenes, thus it is impossible to maintain all of them. However, none were intentionally omitted from the finished product during manufacture. As a result, it’s imperative that the CBD tincture you’re using is the most potent it can possibly be.

Effect of myrcene on nociception in mice