P.S. Our dogs, us, our cats, and other mammals all have the same endocannabinoid system.

The ECS itself is made up of three parts:

The ECS is not only a natural part, but also a fundamental part of our dog’s bodies. You may have heard a lot of claims about marijuana’s therapeutic properties in general, or the cannabinoids THC and CBD in particular. 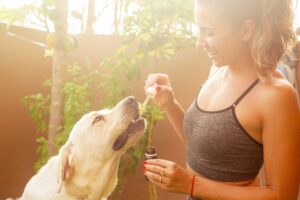 What’s the Endocannabinoid System Responsible For?

The ECS is now known to be involved in a wide variety of bodily functions, including (but not limited to) sleep, mood, memory, reproduction, and appetite. The Endocannabinoid System is also responsible for:

The ECS’ ability to improve communication inside and between the body’s systems and restore something called homeostasis is one of the key reasons it affects so many areas of the body.

Homeostasis is a state of equilibrium in the body. It simply means that if the body deviates from its natural state, it will be restored. All in the body is kept healthy and functioning as efficiently as possible by homeostasis.

If your dog’s body temperature is too high, homeostasis will do whatever it can to get it back to normal. For example, when you’re hungry your stomach starts making strange noises. When you’ve eaten, homeostasis is fulfilled and can go about its business.

Cannabinoids are molecules that interact with the ECS and are formed by both the body and plants in nature. The body creates ‘endocannabinoids,’ which bind to cannabinoid receptors and ‘wake up’ your dog’s systems. Exogenous cannabinoids, such as those formed by the cannabis plant, appear to the body as though they were its own native cannabinoids.

Exogenous cannabinoids, such as THC and CBD, are cannabinoids that are not produced naturally by the human body. They are chemically similar to our naturally synthesized cannabinoids, but they use a different pathway (receptors) to convey information to generate physiological results.

Anandamide (N-aracidonoylethanolamine or AEA) and 2-AG are the two major endocannabinoids (endogenous cannabinoids) identified in scientific studies (2-ArachidonoylGlycerol). Both of these endocannabinoids are only produced when they are needed.

The AEA molecule is also known as the “bliss” or “joy” molecule. Anandamide is the receptor that enables 9-Tetrahydrocannabinol to be used therapeutically (THC). It’s also significant because it was William Devane and his team of researchers who found the first endocannabinoid in the pig brain in 1992.

2-AG is found in high amounts in the central nervous system and has been found in human breastmilk. When 2-Arachidonoylglycerol (2-AG) was isolated from the brain of a rat and the gut of a dog, it became the second endocannabinoid to be discovered.

CB1 receptors, first discovered in 1988, are widely distributed in the central nervous system. However, it is not restricted to the CNS. It has been discovered in other parts of the body, but it is particularly abundant in the brain (neocortex, hippocampus, basal ganglia, amygdala, striatum, cerebellum, and hypothalamus).

CB1 is thought to influence learning and memory, decision-making abilities, motor responses, sensory perception, and emotional responses since it is present in high concentrations in major areas of the brain. Scientists are still unsure how to improve the effects of the CB1 receptor, but they have discovered that conditions like chronic pain, anxiety, and wasting syndrome (often linked to chemo/AIDS) benefit from activating CB1.

You’ll hear about people who use cannabis to self-medicate their anxiety. CB1 has been triggered by the cannabis plant. That’s why it works.

Immune cells and other parts of the peripheral nervous system contain CB2 receptors. Dogs were found to have a large amount of receptors in their endocannabinoid system, specifically in the spine, in a study performed by the University of Bologna, Bologna. This helps dogs to use CBD more efficiently. Dogs have more receptors than other animals, according to studies, which explains why they are more responsive to CBD oil.

Enzymes are used to aid in the production of endocannabinoids by the body. They’re also in charge of breaking down endocannabinoids after they’ve been used. Enzymes in the body, for example, break down 2-AG and Anandamide.

Endocannabinoids and the ECS system, in short, are in charge of keeping your dog’s body and its various systems in order. Homeostasis is a term that refers to a state of equilibrium. If something is wrong with your dog’s body or there is an imbalance, the compounds in a full spectrum hemp extract will help trigger the correct response, allowing the body to repair itself.

The endocannabinoid system holds a lot of promise. When cannabinoids are added into the Endocannabinoid System, it helps dogs with cancer, seizures, inflammatory bowel disease, nausea, and pain regain equilibrium in their bodies. THC and CBD, for example, are exogenous cannabinoids that can be used to reduce the side effects of cancer treatments (radiotherapy, chemotherapy).

7 thoughts on “What’s the Endocannabinoid System?”